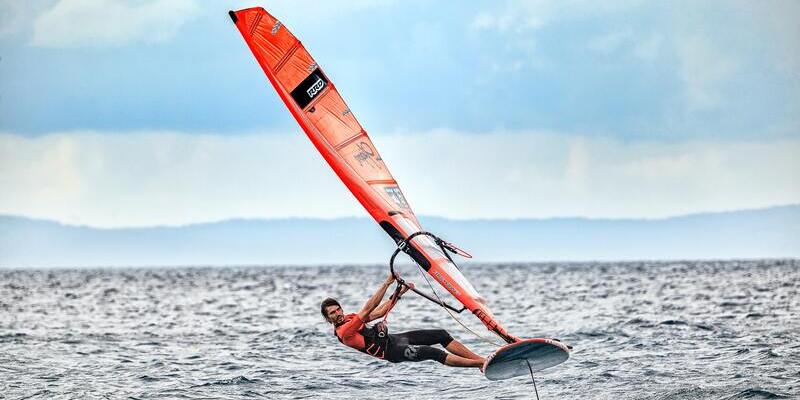 Normally, windsurfing is always dependent on the weather. It usually takes a lot of wind, for example, either to create the waves or to make it possible to move around at all. With foil surfing you are more independent of that. In this article, we’ll show you everything you need to know about foil surfing.

It’s a bit like “Back to the Future”, when people flew over the streets on a hovering skateboard. If you bring the whole thing onto the water, you talk about foilsurfing.

How does it work exactly?

A so-called hydrofoil, which is attached to the bottom of the board, is the secret of this sport. This makes it possible for the board to lift up to a meter out of the water even in lighter winds or at lower speeds, which quickly creates enormous speed. It is therefore not surprising that this sport is becoming increasingly popular, especially in racing.

The foil consists of a front and rear wing. These are attached to the so-called fuselage, which is nothing more than a longitudinal beam. This part of the foil is fixed to an aluminum or carbon mast, which in return is attached to the board. The mast has a maximum length of one meter. The front wing has a maximum width of 85 centimeters.

Due to the fact that this sport was very trendy two years ago, there were numerous manufacturers who built boards especially for foilsufing. However, some boards are also suitable for both. If the financial costs are somewhat higher, it is best to opt for two boards. However, the hybrid variant is also a successful alternative. This usually depends on the financial resources or the intensity of the exercise.

What is special about foil boards?

In addition to the hybrid boards, there are also special foil boards. They are basically shorter than classic boards for windsurfing. The tail is also wider and the loops are on the outer edges. The fin boxes are additionally reinforced and the edges are built more voluminous. This ensures that the board does not sink if it does touch down. At the same time, this construction also provides additional boost.

Are you interested and do you want to try the sport? Then sign up at a water sports school. If you already have experience, this is also an advantage. Because here, you can only improve by taking a course. And who knows, maybe one day you’ll be competing in the World Cup.