That’s what the trend sport Spikeball is all about 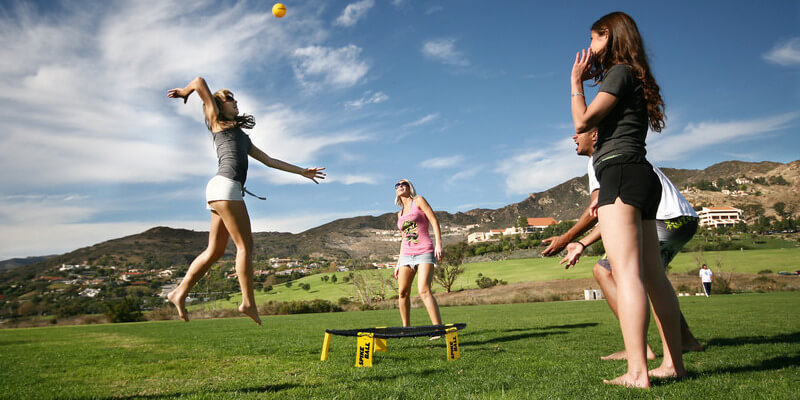 Sunny days were certainly no rarity this summer. The action-packed trend sport Spikeball was nevertheless rather a marginal phenomenon at the lakes and parks in Germany. But that could change in the future.

The well-known german founder show “Die Höhle der Löwen” (The Lion’s Cave) is similar to a show in the USA. There it is called “Shark Tank” and could also help one or the other idea to great success. And yes, also the young inventors of the trend sport Spikeball used the show as a stage for their world-wide successful game.

How does Spikeball work?

Much of spikeball feels like beach volleyball. However, the ball does not have to be played over a net, but on a round trampoline about one meter wide from where it jumps up again. The duel is played two against two and the teams try to smash the ball onto the net in such a way that the ball then falls on the ground. The other players may pass the ball twice, then it must be played on the net. A point is awarded if the opposing team drops the ball to the ground or requires more than two passes. After agreement 21 or 15 points are needed to win.

What do you need?

To play you need a spikeball set consisting of a net and several balls. The playing field (360 degrees) is unlimited, which is why it is best to look for a place outside where you have several meters of free space without disturbing objects in the way. The net can be set up quickly and can be adjusted according to the skill of the players. For beginners it is recommended to stretch the net very strongly. Advanced players can increase the speed and difficulty of the game by leaving the elastic net less tight. Of course the three other players should not be missing.

Your friends are sceptical when it comes to trying out new sports?

No problem, in most big German cities you can find already spikeball communities that meet and train together. The idea of competition must not be missing when playing spikeball. This summer the second German Spikeball Championship was held in Freiburg im Breisgau. Many more are to follow.