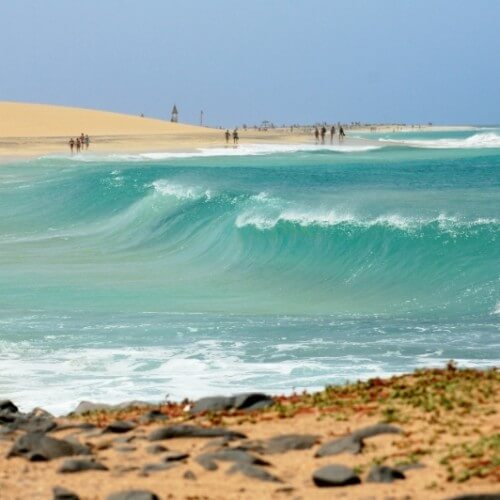 Join our Kitesurf Adventure to Sal – the island with the best-known waves worldwide: the Punta Preta and the local who revolutionized kitesurfing: Mitu.

In early days, Santa Maria was a place of accomodation for the workers of the salines. At the end of the 19th century, after the strong decline of the local salt industry, the towns population decreased indredibly. On the other hand, tourism reached the island and especially the places near the beach became popular hotspots. Join our trip, catch some dazzling waves and discover the charming island with its hidden beauty and historical backgrounds.

Our program? Kiting, kiting and again kiting. And of course, we won’t miss the one or the other beer in the twilight. The Cape Verde Island will serve the perfect entrance to the wave. We will leave the hotel in the morning to check out the perfect kitespot for some morining kite sessions and we will more or less spend the rest of the day at the beach.

The waves at our “homespot” roll ashore in quite long intervals, so you will find finest shallow water in between. Not only wave junkies will be fully amazed by the ocean, also beginers who slowly want to get used to bigger waves will be satisfied with the conditions there. Generally, it is possible to practice everything so don’t be scared – it is not going to be a pure wavecamp, but if you are in the wave once you probably don’t want to get out of it anyway…

We recommend the kitecamp on the sal kapverden for the following levels:

Beginner: suitable – some spots are easy to ride, others are more difficult – riding in both directions shouldn’t be a problem 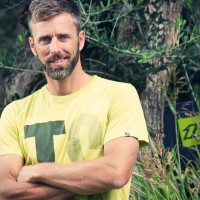 Vacation with like-minded people! Big fun with awesome company , breathtaking kite sessions, celebrating learning outcomes together and exploring the Cape Verde Islands. Relaxing in the evening and going out together – this is what the program is about. With us you are not feeling lonesome and you don’t need to worry about any kind of organisation. We can hardly think  of a more relaxed kitesurf holiday!

We will stay in Santa Maria. The distance to the airport of Sal is around 18 kilometres. The main attraction of the village is the more than 8 kilometres long white sanded beach with blue water – a beautiful scenery you definately haven’t seen before.

We are going to stay at the Apartmenthotel Ponta Preto  where you will definately feel the Kiters Community atmosphere. We share the apartments and live in “Kite flat sharing communities”. The apartment complex Ponta Preta has 2 houses (the main house and an annex) with more than 40 apartments. The buildings are located in a quiet and calm side street, very close to the beach. The complex is modern, new and well organised.

The nightlife is quite vibrant and diverse where one can party till the early morning hours. You should try out the local Caipirinha, the “cachaça por Grogue”. Besides, you will find many lovely and cosy restaurants where you can go for dinner.

All England Lawn Tennis and Croquet Club in Wimbledon, London

If you love snowboarding, traveling and the warmth

Tennis is mostly mental. You win or lose the match

Is there anything more beautiful than practising y