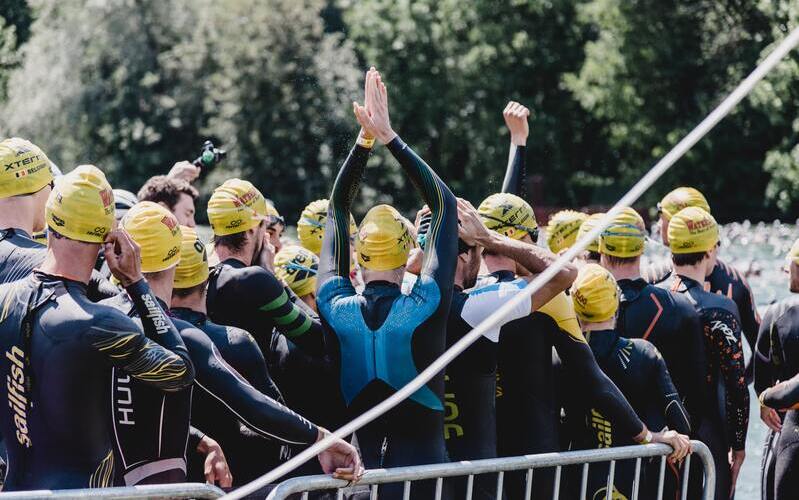 Triathlon – a mix of swimming, cycling and running

The triathlon season is gradually approaching. There is nothing better than spending time outdoors doing physical exercise. The sport promises a mixture of swimming, cycling and running.

The endurance sport originated in France in 1920, when “L’Auto” was the first sports newspaper that published an article about the first multi-discipline events, “Les Trois Sports”. Afterwards the USA follows in 1970. At the time the enthusiasm of the US-Americans developed. Finally, the first official triathlon took place on the 25th of September 1974. 46 participants started on the event with the name Mission Bay Triathlon. The distances were 6 miles running, 5 miles cycling and 500 yards swimming.

A short time later, the legendary Hawaii Iron Man Triathlon was organized. The event gained worldwide attention. Consequently, hundreds of triathlons were created in the USA. From 1982 also in all of Europe. In the mid-1980s, the multi-discipline sport was included as an Olympic discipline. The distances at that time were 1.5 km swimming, 40 km cycling and 10 km running.

Procedure of a triathlon

The sequence of a triathlon consists of swimming, cycling and finally running. At the beginning all participants begin at the edge of the shore or pool . Furthermore, all start together or also in a rolling start, in intervals of seconds.

The following part is the transition area, where the swimming clothes are exchanged for the cycling clothes. The change time between the runs should happen in the shortest possible time. Since this flows into the target time with.

After that comes the bike course. On it stands in the change zone a transition from the wheel equipment to the running shoes. Afterwards the participants approach the already desired goal.

On average, the participants complete this competition distance in less than one hour. The distances in the swimming pool are 250 to 500m. Furthermore the bike lap is about 2 to 10km and the run lap is 1.6 to 3.5km.

In this format, groups of 2 women and 2 men form a team. In short super sprint distances, one candidate from each nation starts. According to the principle ‘Ladies first’, the participants alternate between the genders. The team with the last runner crossing the finish line wins the competition.

The multi-discipline sport is composed of 1 to 4km swimming, 100 to 200km cycling and 10 to 42.2km cycling. This is the most demanding version of triathlon. The Ironman Triathlon in Hawaii is one of the most famous long distances.

With the time of 7:27:53, the German athlete Jan Frodeno sets the best time in the Tri Battle Royale in 2021. In the women’s category, Anne Haug achieved the fastest time run in the period of 8:31:32.

Participating in a triathlon does not only mean to manage the distances. A reasonable training beforehand is of great importance. Since the sport requires an incredible amount of endurance.