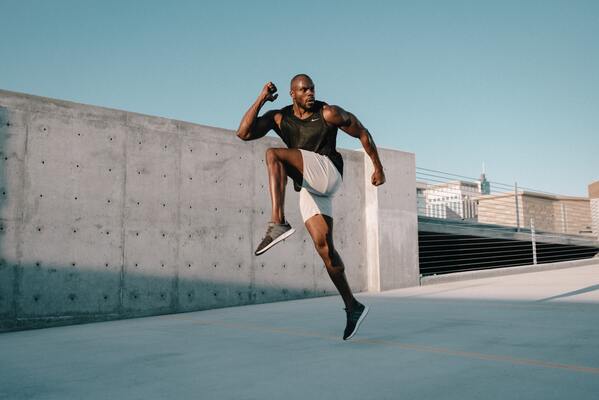 Short and snappy – that describes HIIT interval training best. Fitness fans swear by the effectiveness of the short workouts and quickly see their first successes. In this article, we’ll tell you exactly how such a workout is structured and what you need to keep in mind.

Many start the new year with the resolution to do more sports. No surprise – over the holidays, most people have a wide selection of delicious dishes. That make one or two people feel guilty and boost their sporting motivation. But hours of laps through the park or on the cross trainer without noticeable results, are yesterday. The longer, the better is out.

However one training method that is becoming more and more popular is the HIIT-Workout. It’s just the training to make those Christmas pounds fall off again. Now we’ll show you how it works . In addition, which exercises are suitable for doing at home.

As the name suggests, it combines two of the most effective training methods. On the one hand, the “high intensity” training with almost maximum intensity. This not only gets the oxygen absorption going, but also the metabolism is stimulated all the more. On the other hand, interval training is characterized by alternating load phases. Including high intensity and recovery phases with low to medium intensity.

In short, it describes a training session that switches between short highly active interval periods and active rests.

An example of a highly active interval is a sprint, while normal walking in between is the active break. Therefore an interval is a load unit plus a short break as recovery. These are important to be able to go all out again in the next set. It will be possible to train at high intensity in the last rounds.

During the highly active interval phases, the body needs more oxygen than it can provide at that moment. This greater oxygen deficit and the resulting significantly increased an afterburn effect. Moderate endurance leads to higher caloric turnover during an exercise and thus also generates more fat loss.

In addition, during a HIIT workout our body is able to burn calories and still build muscle mass – so it’s the perfect combination.

Besides the increased calorie consumption, the stimulated metabolism has other positive effects on our health, such as lowering blood pressure and cholesterol levels.

HIIT is not focused on any particular sport and can be flexibly combined with other disciplines. Whether jogging, swimming or even strength training – any sport is suitable for HIIT.

Here are three examples of how you could practice HIIT.

The simplest exercise is to alternate between sprinting and walking. This version is ideal for beginners. Not only is it doable without any additional equipment. It can also be practiced well outdoors. The sequence for this looks like this:

As a completion to running, it is still possible to perform HIIT workouts. These promote strength and endurance.

HIIT interval training on the bike:

As mentioned earlier, a HIIT workout does not have to be specific to one sport. For example, cycling enthusiasts can also use their bike for this purpose. Whether indoors or outdoors, the alternation between fast and slow is also perfect for cycling.

According to the following training plan, cyclists can pedal properly:

Road cyclists could do the following workout.

As mentioned at the beginning, such a workout stimulates the metabolism particularly quickly. Regularly performended promotes a faster melting of the fat deposits. So if you want to actively lose a few kilos, you can train easily and quickly from home – without any equipment at all. Accordingly, there is no excuse now.

In the meantime, there is a large selection of videos on the Internet with instructions for optimal execution:

A workout is more effective if it does not always take place in the same medium load range. Rather changes between strong exertion and recovery. For this reason, HIIT should definitely be part of your training plan.

However,  make always sure to perform the movements technically correct during HIIT, even under strain in order to avoid injuries. Beginners should also accustom their body to the loads with gentle sports first. Otherwise, a bad muscle soreness will announce itself.