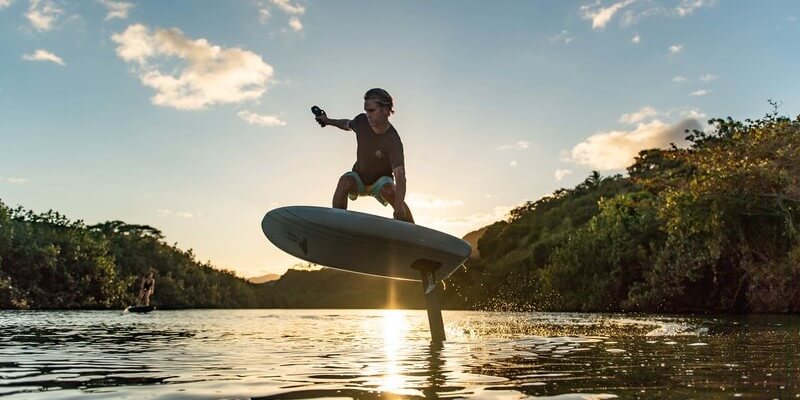 Float casually over the water without having to rely on wind or waves? The first series-produced electronic foil boards from Lift Foil make this dream come true.

The small company Lift Foil in Puerto Rico has been building foils for nine years now. This pioneering work may be one of the reasons why, as a small company, they have succeeded in producing the world’s first electronically driven foil boards in series. eFoil is the name of the good piece that wants to combine surfing and flying pleasure and causes a sensation in the surfing community.

What is a foil anyway?

Foils can lift not only surfboards, but whole boats and ships from a certain speed out of the water. The wing at the end of the long fin is similar to an airplane wing. Water flowing under and over the wing creates such a strong buoyancy force that the entire fuselage is lifted out of the water. As a result, displacement and frictional resistance are almost completely eliminated. When windsurfing and kitesurfing, but especially when sailing, foils are attached more and more often in order to glide over the water at high speed even with less wind.

The company Lift Foil has now equipped such a foil with a motor to float over the water without wind. And that works surprisingly well. In perfect balance between stability and manoeuvrability you can carve over the water. A remote control controls the speed. They can reach speeds of up to 40 km/h. After about 30 km the fun is over and the board has to be plugged in.

The electronic foil boards are still not exactly cheap. You have to raise 12500 US dollars to become the proud owner of an eFoil board. eFoil boards can be tested however also at different places world-wide. In Germany there are test centers in Berlin and Bielefeld.